Kubernetes What Can The Tool Do? 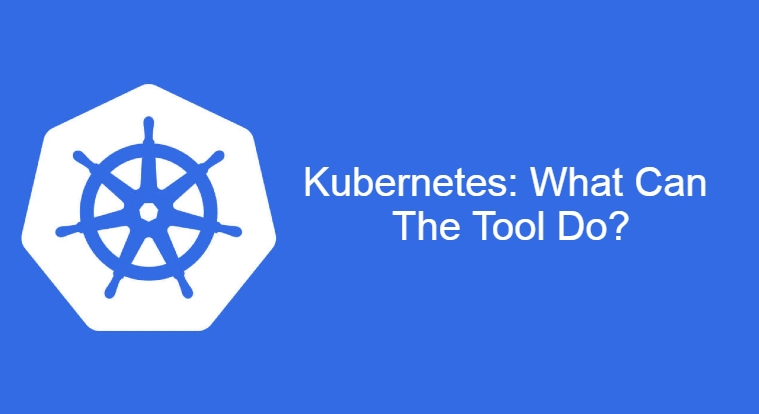 Containers have fundamentally changed software development but also other areas of IT. The software runs with the new technology in a specially designed virtual environment. Everything that the application needs is in the container and remains there securely and reliably. Several instances can thus also run side by side.

However, for such containers to be easily managed because you rarely work with only one at a time, supporting tools are required. Kubernetes (also known as “K8s”) is a container management tool that can handle large numbers of containers.

What is Kubernetes? History and goals

Kubernetes is only a few years old and yet already has a good reputation. The reason for this is probably due to the link to the IT giant Google. At the time, the company was the driving force behind the open-source project, and some Google employees helped develop Kubernetes; at the same time, however, many developers outside of Google worked on the software. The first version of Kubernetes was finally released in 2015. In the meantime, the tool is compatible with many different cloud platforms such as Azure or AWS and can be used there.

But that was not the goal at first. The starting point for Kubernetes was Google’s Borg and Omega systems, which were used to manage clusters internally. At that time, no one had even thought about virtual cloud applications. But then it was decided to publish an open-source version and thus make the development of Kubernetes public.

Kubernetes is written in Go, the programming language developed by Google, and is aimed for use in the cloud as well as on local computers or in on-premises data centers. The commitment to the cloud can also be seen in the further development of the project: In the meantime, Google and several other companies under the umbrella of the Cloud Native Computing Foundation are driving the open-source project forward with the help of the very extensive community.

How does Kubernetes work?

Kubernetes is a container orchestration system. This means that the software should not create containers, but manage them. To achieve this, Kubernetes relies on process automation. This makes it easier for developers to test, maintain, or publish applications. The Kubernetes architecture consists of a clear hierarchy:

Besides, Kubernetes architecture is based on the master and slave principle. The described nodes are used as slaves, i.e. the controlled parts of the system. They are under the administration and control of the Kubernetes master.

The tasks of a master include distributing pods to nodes. Due to the continuous monitoring, the master can also intervene as soon as a node fails and directly duplicate it to compensate for the failure. The actual state is always compared with a target state and adjusted if necessary. Such operations are performed automatically. The master is also the access point for administrators. They can use it to orchestrate the containers.

Master and nodes each have a specific structure.

The slave (or Minion) is a physical or virtual server on which one or more containers are active. On the node, there is a runtime environment for the containers. Besides, the so-called Kubelet is active. This is a component that enables communication with the master. The component also starts and stops containers. With the cAdvisor, the cubelet has a service that records the resource utilization. This is interesting for analyses. Finally, there is the Kube-proxy, with which the system performs load balancing and enables network connections via TCP or other protocols.

The master is also a server. To ensure the control and monitoring of the nodes, the Controller Manager runs on the master. This component in turn has several processes:

Next to the Controller Manager runs a database. This key-value database stores the configuration of the cluster for which the master is responsible. With the Scheduler component, the master can automatically take over the distribution of Pods to nodes. The connection to the node works via the API server integrated into the master. This provides a REST interface and exchanges information with the cluster via JSON. In this way, the various controllers can also access the nodes.

There is no answer to the question of whether one should rather use Kubernetes or Docker. Because you can use the two programs together. Docker (or any other container platform like rkt) is also responsible for creating and executing the container for Kubernetes. Kubernetes accesses these containers and takes over the orchestration or automation of processes. Kubernetes alone cannot provide the creation of containers.

At most, it competes with Docker Swarm. This is an orchestration tool for the manufacturer of Docker. This tool also works with clusters and offers similar functions as Kubernetes.

Kubernetes in practice: application and advantages

In software development, Kubernetes now plays a major role, especially in agile projects. The cycle of development, testing, and deployment (and all possible intermediate steps) is simplified by container orchestration. Kubernetes makes it possible to easily move containers from one stage to another and automate many steps.

Scaling is an important factor particularly when renting external cloud storage: To save costs, Kubernetes can make perfect use of resources. Instead of keeping currently unused machines running, Kubernetes can release these resources and either uses them for other tasks or simply not use them at all, which can save costs. Thanks to Autoscaling, Kubernetes takes care of its own not to use more resources than are actually necessary. But fast scaling is also extremely important the other way around: If you are releasing your software for the first time, it is sometimes not possible to estimate correctly what the influx will look like. To prevent the system from collapsing when demand is extremely high, Kubernetes can quickly make additional instances available.

The advantage of Kubernetes is also that you can easily link several platforms. For example, it is possible to use the solution in a hybrid cloud. The system is then partly located on its own local servers and partly in a remote data center, in other words, the cloud. This option in turn increases scalability even more: If more resources are needed, they can usually be added quickly and easily by the cloud provider.

Finally, Kubernetes also helps developers to keep an overview. Each container is clearly marked and information about the status of each instance is available. At the same time, version control is part of Kubernetes. So updates can also be tracked afterward. In general, publishing updates is one of the main advantages of the system: New versions can be rolled out in such a way that no downtime occurs at all. Pods are changed one by one instead of all at once. This applies to both the internal trial version and when new versions are released to end-users.

Since Kubernetes configures many aspects of orchestration independently, some pitfalls at work are eliminated. Therefore, Kubernetes is generally considered a secure system: Failures occur rather rarely, and if a Pod does not work as planned, the Kubernetes master has direct knowledge of this and can replace the failure.

Interested to deploying a DevOps test automation strategy in your company for better project deployment? Heyooo will be happy to support you in the implementation!